The Big Pulse
I’m an ant out of depth

I want to tell you what I'm really doing. I figure that it's time I told you and came clean with it. It's not easy. If you have read my blogs you know my old joke about "there's only two types of people" (so I will not repeat it). But one type of people won't get it (what I'm trying to tell you now), and the other type gets it. But OK, let's get on with it: You probably think that I'm analysing the markets. That's more or less true, but that just the mechanics of it. That's only the outer layer, the daily bread. I mean, I got to buy groceries and coffee, and the local store just look strangely at me if I try to pay them with a blog post :-)

The outer layer is that I am analysing the markets to show where stocks and commodities and the economy is heading, but the inner layer is that I want to understand more. I'm fascinated. My old joke about "there's only two types of people" means that one type of analysts are only interested in the results (and try to gain some money from it). The other type of analysts are also interested in the result, but is concerned with understanding the mystery of it all. Of course I'm in the latter group. I wouldn't be writing this blog - that your eyes are traversing right now - if I was in the first group (especially with a free of charge blog like this).

On the second level I am more or less a cross between a medical scientist and a detective. You see, I'm trying to understand the pulse of the market. You could compare me to a medic that is small like an ant. I'm stuck way out there at the extremities of the big body, right at the end of one arm. So I'm standing at the wrist, and I can see a big blood vessel pumping. That's the market, and I'm an ant in size. And I go to the wrist and feel the pulse and the rhythm. And then I try to make sense of it. I'm a medic because I feel the pulse of the giant laying before me (although I can only see part of him - not even his whole arm). But I'm also a detective because I'm trying to figure out what this is all about.

So as a detective I have a notebook where I jot down my observations. I'm now flipping my notebook open, and here's the first two entries:

Mystery no. 1: Where does the pulse come from? I understand the arteries and the blood, that's fine, but I don't understand where the pulse comes from? What generates this wave pressure that pushes the blood? I can clearly see the effect on the blood and on the expansion and contraction of the blood vessel (the expansion and contraction of the market). But what is the mystery force that pumps?

Answer: After travelling a long way - like Frodo’s long journey to the volcanic mountain  - I have found the heart. That is the source of it all. I have found the thing, that pumps the blood.

Finding the heart was a huge jump in learning, but after some studies of it, I just got more questions...

Mystery no. 2: I'm trying to understand why the heart rate fluctuates (which in turn affects the pulse, the market). After my walk all the way to the heart on my small ant legs, I did not find that the heart beat in a perfectly rhythmical Lub - Lub - Lub - Lub. I expected to find that, but that's just because I didn't know any better. In fact, I found that the heart is doing a double beat: Lub dub - lub dub. First the atrium contracts and then the ventricles contract. Lub dub - lub dub. The pulse is the waveform generated by the left ventricle as the blood is being pushed out, creating a surge of blood, that will eventually wind up in the arm where I started the journey.

I study the heart closely, and learn so much more than when I stood looking at the pulse at the wrist. But even here at the heart, I start to wonder again. Perhaps there are yet another cause. The heart is the cause of the pulse, but what affects the heart? If you exercise, the heart beat quickens. If you sleep, the heart beat is slow. But if I see a quick pulse now, then it could be caused by the body doing exercise, or by the body having a fever. Fever will quicken the pulse. Or is it because he is ecstatic, kissing a girl? A quick pulse could be good, or it could be caused by fever or sickness. So I’ve come a long way and I understand much more - but I eventually end up with more questions than when I started.

So the dominoes effect is: Exercise and kissing is a cause that affects the heart, which in turn affects the pulse, which in turns affect my apparatus (my moving average) that I have placed way out in the extremities, out along the arm at the wrists. I'm still being sent readings from this moving average apparatus that I left way out there at the wrists. It's transmitting this wireless to me, a wonderful apparatus, but it's kind of limited with the bigger philosophical understanding. A break above the moving average simply means that the blood vessel is expanding in a wave of blood pressure. But standing here at the heart, I already know quite early on that the pulse is starting and that it will build up to be bigger. An even earlier step - seeing the guy starting to do push ups, means that I know the heart will soon start to pump harder.

Let's move the analogy into something more tangible. Let’s look at the GDP and try something fun. On the right you have a picture showing the GDP, measured as the deviation from trend. Right below that, you have a new picture showing the same GDP overlaid with the normal heart rhythm of a person. See any similarities? Can you see the pulse we are studying? They are not identical, because the GDP is not a person, but the rhythm is darn close. So much so that you could actually say that the economy is a “living thing” with a pulse of its own. An interesting viewpoint, wouldn't you say?

I'm standing at the heart and seeing all kinds of new things. I know so much more now, and still I don't know enough. So, the conclusion is that I'm a small ant that has travelled a long way, just like Frodo, and seen some of the mystery. So am I an Ant out of depth? Yeah, you might say that. You might say that we are ant sized beings, sitting at the extremities of a giant universe, feeling the pulse, trying to get an idea of how the heart works. 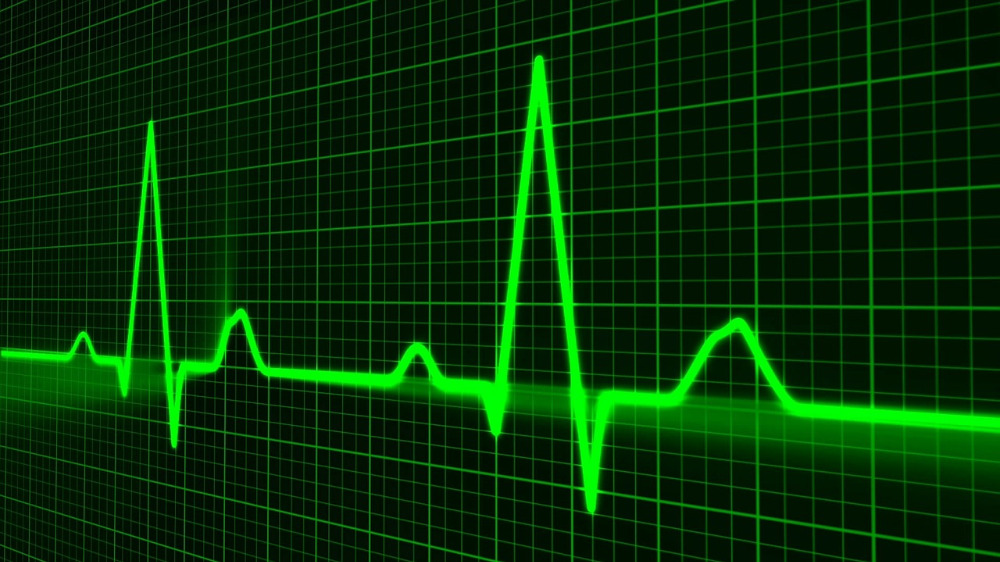 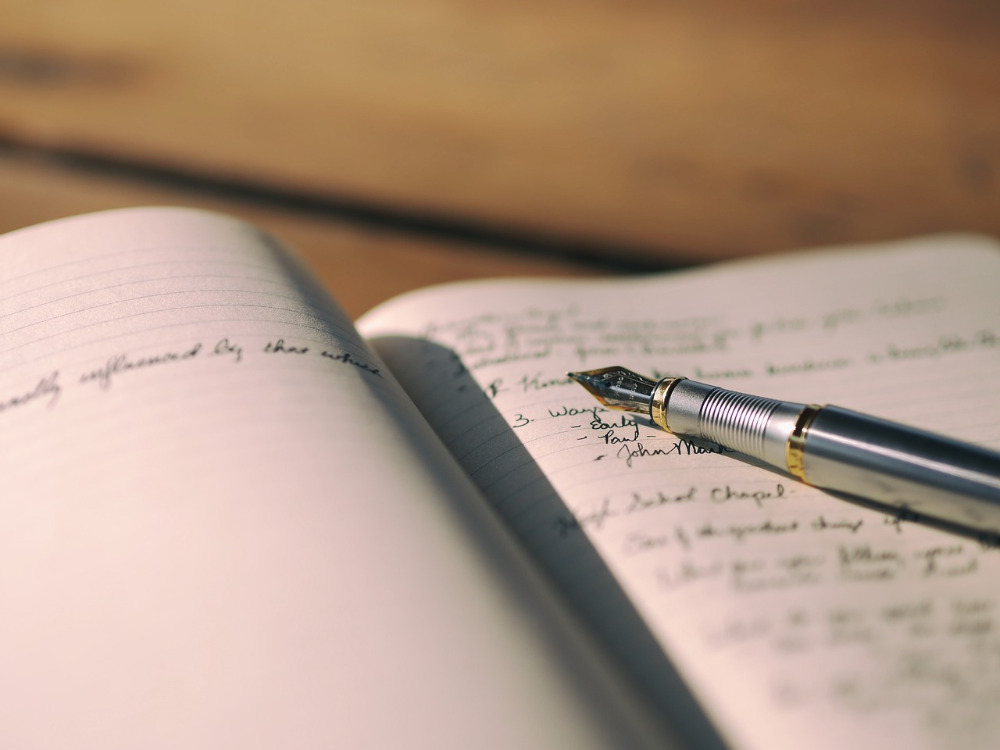 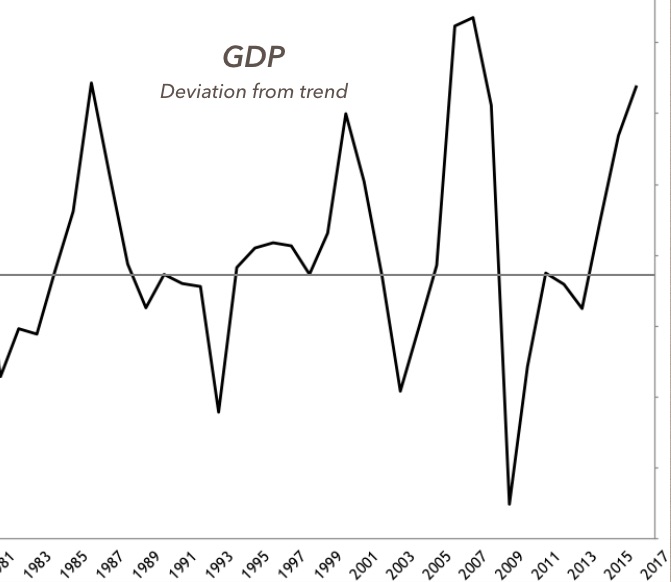 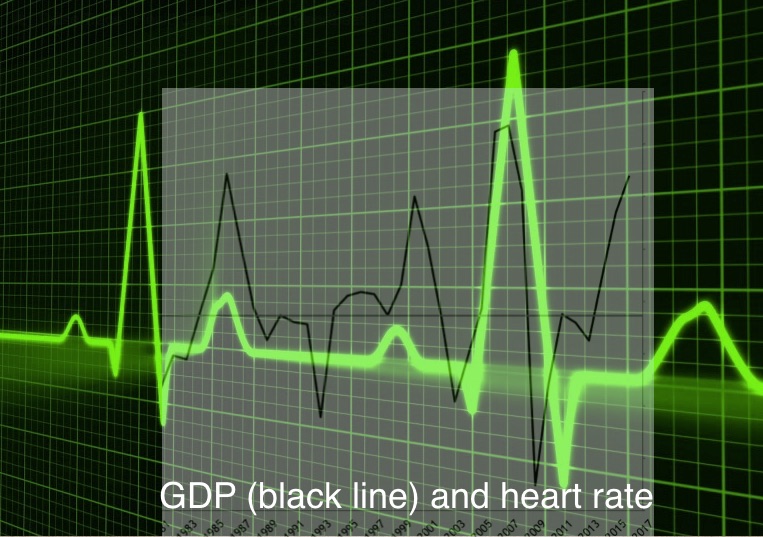